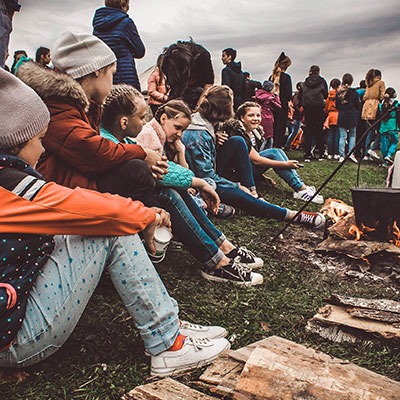 A Cowboy Birthday Party Theme just begs to have some games.  Being quite an action packed theme, the kids are usually really fired up and ready to leap into some Wild West action.

Most of the cowboy party games below are best suited to outdoors but if you are inside, just adapt the games but do try and make sure you have quite a lot of space.

Also don't forget to check out my Cowboy party theme with plenty of ideas for Wild West grub and cowboy activities and more.

Set up a mini obstacle course using chairs and stools or whatever you like. Create a cattle pen out of wooden posts and string. Give each child a stick and a ball and see who can be the quickest to round up their cow (ball) though the obstacle course and into the pen.

This wheelbarrow race is one of the traditional cowboy party games. Split the kids into pairs and have one be the horse and the other the wagon. The horse places his hands on the ground whilst the wagon grabs the horses feet by the ankles. Then it's a race to see who can cross the finishing line first.

Divide the kids into 2 teams of bandits, each with a sheriff. The sheriff has to catch a member of the opposite team by touching them.

The caught bandit is then considered to be in jail and must stand still. Their team mates can rescue them by crawling though their legs but if they are caught doing so by the sheriff, they are also have to stand still and are in jail.

First team to catch all the other bandits is the winner. 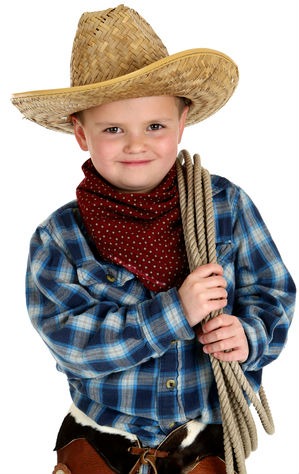 Set up some plastic bottles filled with sand. The kids have to see if they can toss the horseshoe over the bottles. If you don't have any horseshoes, just use rubber dog rings.

Hide some plastic cowboys around the yard or the house. See who can find the most. Also hide a sheriff's badge. The kids can keep what they find and the person who finds the sheriff's badge can be the sheriff in the next game.

Get hold of some small bean bags or make your own using two small cloth squares sewn together and stuffed with dry rice. The children need to try and toss the bean bags into some big Wellington boots or a large cowboy hat.

Penny in a Hay Stack

Hide pennies, small toy horses or other cowboy items in a large pile of hay then get the kids to pile in and find them.

This is one of my favorite cowboy party games. Spray paint small bits of gravel in gold paint and bury them in a paddling pool filled with a mixture of sand and water.

Give each child a disposable aluminum pie tin with holes punctured in the bottom. Let them sieve the sand/water and see who can find the gold nuggets.

These can be exchanged for candy or prizes afterwards although you will find that most kids want to keep the gold!!

Hide chocolate coins around the yard or house and send the kids on a gold rush to see who can find the most coins.

Make a rattlesnake out of a long sock stuffed with a rattle at the end and then padded out with newspaper. Sit the cowboys/girls in a circle and put on some music.

Whilst the music is playing, they have to pass round the rattlesnake but once the music stops, the person left holding the snake is said to have been bitten and sits out of the game.

A pinata works brilliantly as one of your cowboy party games as it is a great way of using up some of the kids energy.

If you have the time and don't mind getting a bit messy, then have a go at making your own pinata.