This exciting birthday theme was submitted by Danielle (Hardwick, MA, US) 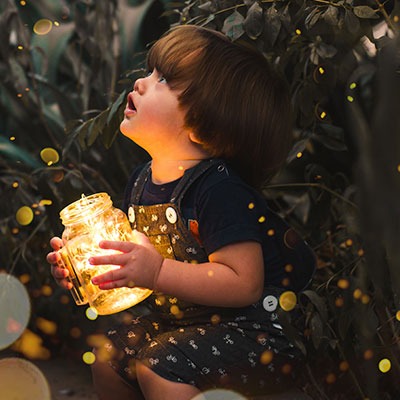 For my daughter's 3rd birthday, she chose the movie Brave.

I started with deciding on the color scheme. There are plenty of beautiful, rich colors in the film, but I wanted to keep it fairly simple, so I decided to stick to the blue and teal color families when choosing decorations. We had royal blue tablecloths left over from my son’s Wonder Pets party over the summer so I broke those out, grabbed some matching forks, along with Caribbean blue napkins and ribbon, as well as balloons and streamers in both of those colors.

Then I decided on the snacks and food, which included chocolate teddy grahams (Bear Bites, because bears are a big part of the film), goldfish (Flailing Fish, to commemorate the scene where Merida and Elinor bond over fishing), cupcakes with paw prints on them made out of mini York peppermint patties and junior mints (Cub Cakes, again for the bears), green punch served in a cauldron (Brave Brew, for the spell that Merida gets from the witch in the woods), mac and cheese (Macintosh and Cheese, for Lord Macintosh, a leader of a neighboring clan), mini corn muffins (MacGuffin's Muffins, for Lord MacGuffin, another clan leader), and chips and dip (Dingwall's Dip and Chips, for Lord Dingwall, still another clansman). I also had mini water bottles that I made simple labels for with pictures of characters and quotes from the movie.

For the invitations, I found this adorable clipart pack on Etsy for $5 that included cutesy drawings of Merida, her 3 brothers, and her mother as a bear, along with a bow and arrow and target. My husband used these to put together e-vites.

For the decor he also used our Silhouette to make an amazing banner on turquoise sparkly paper with bear and archery shapes cut out as well as our daughter's name and "Our Brave Girl is 3!", and "Happy Birthday My Wee' Darlin'" (quote from the movie), all in Celtic font. We splurged on a Merida and Angus (her horse) stand-up from Birthday Express, and it was so worth it! For balloons we didn't end up using helium and instead let the balloons hang from the ceiling to act like guiding "Will O' The Wisps" to lead to the party from the front hallway. 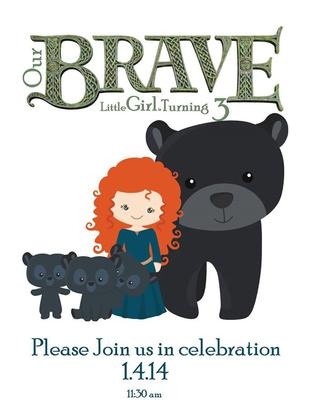 For games I planned 'Queen Elinor says', instead of 'Simon says', and I painted a target on foam board and cut a hole in the middle for a bean bag toss game. For the bean bags, I poured rice into 98 cent knee high stockings I picked up at Walmart and tied them off, cut the excess, and my husband hot glued teal burlap around them to make it look more finished. We also put out a bouncy horse that my kids had, and some coloring pages I printed free from www.colouring-page.org.

Additionally, I made crowns for the kids to decorate with foam sparkly stickers and markers. I used white poster board to make long strips that were about an inch wide, and then subtly but thoroughly scotch taped scalloped triangle shapes out of construction paper in different colors for each of the kids (they actually turned out pretty sturdy). I left them flat for decorating and then fit them to the kids' heads after they were done, securing them closed with tape.

For the favor bags, I used the clipart I bought to make little tags with each of the kids' names on it, which I attached to brown paper bags that I had painted targets on the other side of. For the favors, I took three dum-dum pops and secured blue tissue paper on them with ribbon (another nod to the Will O' The Wisps featured in the movie). I printed free Brave activity books from the Disney website and stapled them (I modified them before printing so they would be pocket sized). My husband and I also made braided pipe cleaner arrows with felt arrow tails, which we made sure to push down the sharp points on.

This party was a big hit with the kids and so fun to plan! I hope that it helps anyone who wants to plan their own Brave party!!

Nicole's comments: Thanks Danielle for your Brave party idea. It sounds fantastic! You and your husband certainly know how to create a party and I love the fact that you made a lot of the decorations and favors yourselves.