Fun and easy games for preschool parties to keep the kids entertained. These are easy preschool games for any group of young children because they are short and simple enough to keep them focused. 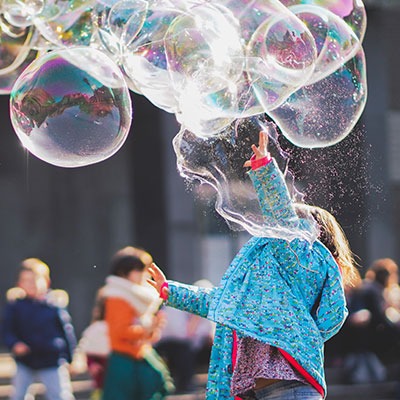 These preschool kid's games go along with the preschool themes found here.

The preschool age group are just starting to enjoy playing games in a group. However fair play and following instructions are not necessarily something that they are very good at.  So when choosing the games for preschool kids, keep them simple and short and let everyone feel that they have done a good job, whether they win or not.

How Many Games to Play - I would plan on playing a couple of games followed by a break for free play.

Which Games to Play - The younger age groups generally love musical games. They lack concentration so keep the games short and with little or no rules. Avoid blindfold games as some children are frightened of them.

Be Prepared - Be prepared and have a few games for preschool party planned and ready, even if you don't necessarily play them all. You will find some games are so popular that the children will play them over and over again.

Get Them in the Mood - The arrival at a party can be an awkward time or even a bit scary for the shy ones or the younger kids. Have some party music going in the background but not too loud and have some toys and simple activities laid out so the little ones can get busy.

Every-one's a Winner! - I don't think you need to give out prizes to very young children. And besides it often causes tears when children don't understand why they didn't get something. However if you want to give out prizes, let everyone win something. It keeps them all happy and instills confidence.

Give them a Break - Don't feel that the children have to be continually playing party games in order to be having fun. In fact, with games for preschool kids, you really only need one or two games over a period of an hour. A bit of 'free' play is often just as enjoyable.

Here are a few more easy games for preschool the kids can play at the party.

Outdoor
Equipment: None
A garden is better for this preschool party game as you need a bit of space. The children all stand round spread out as much as possible. You then call out the names of 2 of the children who then have to run and change places.

Indoor
Equipment: Music
This game for preschool kids is rather like musical statues. Put on some music and the kids have to squeak and scuttle about like mice. The moment the music stops, the kids must be as still and as 'quiet as a mouse'. Anyone seen moving or making a noise is caught by the cat (you) and is out of the game. However give them a cat sticker and then they are can help you with the music. The last child in the game, receives a mouse sticker.

Indoor
Equipment: None
An easy preschool game for the younger ones. Prepare in advance a short story and include lots of animals and noisy farm vehicles. It does not have to be a very adventurous story as the point of the game is to make the noises of the animals and vehicles.

You could start with: "It was a beautiful sunny day down on the farm and the chickens (the kids Cluck) were wandering around the farm yard. Suddenly the big brown cart horse (the kids all neigh) came galloping over to Farmer Giles in his tractor (the kids say broom, broom...)…". and so on.

Indoor
Equipment: None
A preschool game for the 3-4 year old. Think up in advance some characters or animals. With the kids all seated at your feet you then start to silently act out one of the characters or animals. Gradually you introduce some noises and the children then have to guess who or what you are. For example if you were a cat you could run around on all fours, play with a ball or imaginary mouse and then meow.

Indoor
Equipment: Pairs of objects, clothing, bags or small baskets
For the 2-3 year old restrict this party game to one room but for the older children you could spread out a bit. In advance, collect pairs of a number of items such as socks, spoons, pencils, hair slides, toy cars or whatever you can think of. Place one of the pair of each object into bags or baskets equal to the number of kids that there are. The kids don't all have to have the same items and some you could repeat. Allow 5 or 6 items per child. Hide the other halves of the pairs around the room(s). Issue each child with a bag or basket and get them to go on a hunt for their matching halves. First to get a complete collection wins.

Indoor/outdoor
Equipment: Music, 4 pieces of colored cloth (each cloth a different color)
Hang a large colored cloth in each corner of the room. So you might have a red corner, a blue corner etc. Put on some music and the kids all dance around. As soon as the music stops, your shout out a colored corner. So if for example you say, "Red corner", the kids must all rush to the red corner. Last child there is out of the game but they get to help you shout out the next color. To make it more fun, you could also say "Color Mix" and then the kids can go to whichever corner they like.

Indoor/Outdoor
Equipment: Bag filled with small items
I love this preschool game and it always gets a lot of laughs. Before the party think up a simple story with lots of nouns in it. Then fill a bag with lots of small household items. Sit the kids in a big circle and hand one child the bag. Start telling the story and when you get to a noun, the child with the bag has to pick out an item (no peeking!) and say the word in place of the story word. Then you pass the bag to the next child and so on. At the end of the story and once each child has said a word, retell the story all at once with all the funny words the kids said.

Example: Once upon a time there was a big (DOG) who was very fat and very hungry. His favorite thing to eat was (SAUSAGES). One day, he looked in his (CUPBOARD) and found there was nothing left to eat so he decided to go in search of food to see what he could find. First he met a little old (LADY)........

Outdoor
Equipment: Bubble mixture, fishing nets (optional)
I've yet to find a kid who doesn't like bubbles. Hire a bubble machine or even consider making your own bubble mix (it's not hard). Let the kids have fun running around popping as many bubbles as they can. If you feel there is enough space to avoid bashing each other, you could also give them fishing nets to catch the bubbles with. 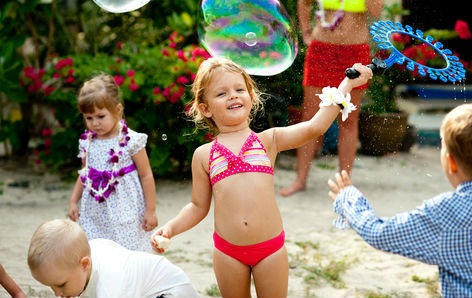 Indoor/Outdoor
Equipment: One or two skipping ropes, music
You'll need some adults to help you with this preschool party game. Lay the skipping rope(s) on the floor and have an adult hold each end. Put on some music and have the kids dance around, jumping over the skipping ropes. Gradually start wiggling the rope so that it is like a snake (keep it flat on the floor to avoid kids falling over). The kids need to try and avoid touching the snake with their feet. There are no winners or losers and you can play the game as long as you like.

This is a long list of games for preschool parties. Remember to choose only a couple of games you think the kids would enjoy.