All the following Easter party games are fun and easy. They are simple to organize and most require very little preparation so you can get started straight away.

Also don't forget to check out my EASTER IDEAS which is full of ideas for crafts, food and more. 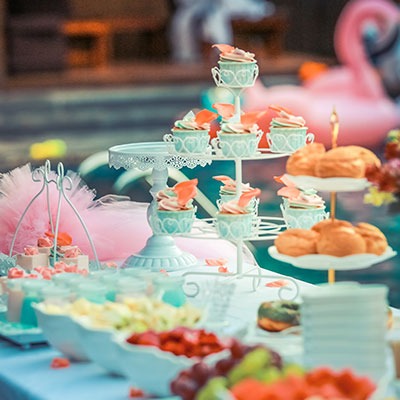 Egg Toss
Equipment : Eggs - lots!!!
This is one of my favorite Easter party games for outdoors. It is for older children as they need to be able to throw and catch. And you're going to need quite a few eggs. You can either use them raw (messy!) but if not, I would definitely recommend them hard-boiled.

Split the players into pairs and line each pair along two imaginary lines about 3 feet apart (less for smaller kids) and so that the pairs are facing each other. Give each pair one egg.

The aim of the game is to toss it to your opponent, which they then have to catch. If they do so, each person in the pair takes one step backwards. It is then tossed again and if successfully caught, another step backwards is taken and so on. The winning pair is the one who manages to throw it the furthest without breaking it.

There is a skill to this game in that when catching the egg, you should move your hands in a backwards motion to reduce the force on it hitting the palm of your hand - much easier said than done!

Equipment : Lots of small plastic or confectionery eggs, Pen and paper.
No special event is complete without an egg hunt on the list of Easter party games . You can make it as complex or as easy as you wish depending on the age group of the children.

For Young Children : Keep it simple and allow each child to win the same amount of goodies if you want to avoid tears.

For Older Children : Most children aged 5 and up love treasure hunt based Easter party games and again you can adapt the level of difficulty depending on the age group. 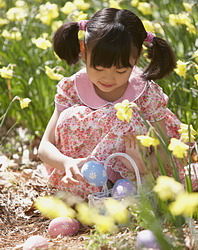 Game 1 :
Divide the kids into teams and assign each team a color. Allow roughly 10 plastic eggs per team and make sure each one is marked with their team color and the clue number. Each team starts off with clue number 1, which should then lead them to number 2 (marked '2' and with their color). Inside will be clue 2 that will lead them to number 3 and so on. First team to collect them all will get first pick at the goodies.

Game 2 :
If you haven't got the strength or time to think up clues, another idea is to put a number on a piece of paper in each plastic egg. Hide them all round the yard or house. Each team has to rush and collect as many as they can or you can give them a set number. You could also hide one special egg (paint it golden for example) which could be worth a bonus.

When they have got as many as possible, they open them up and add up the total of the numbers from the papers found inside. Each team then wins the number of mini chocolate eggs equal to their total.

Equipment : Magazines, scissors, cuddly toy bunny
This is another of my top Easter party games and it is particularly suited to the younger kids.

Tell the kids that "Bunny" has escaped from his hutch and that you need their help to find him. The children then pin on the picture where they think that bunny is hiding.  Then you get all the children to run to their chosen place to see if they were correct.

Equipment : Decorated hard boiled eggs
This is one of those Easter party games that suits all age groups, adults included. At the beginning of the event, get all the guests to paint or decorate a hard-boiled egg. This becomes their special bowler. Take an unpainted egg and roll this about 6 feet from the line up of players. Players then have to roll their own egg as close to the unpainted one as possible. The closet wins.

You could play in teams and play several rounds and then total up each teams score at the end to get the grand winner.

Equipment : Card, Easter stickers, bag, tiddlywinks
In advance make some picture bingo cards in the shape of an egg. Do this by cutting out a large egg shaped piece of paper and on each card put some stickers or you could draw pictures if you wish. Make each card slightly different - you don't want everyone to win at the same time!

In a bag have a duplicate of each of the stickers/pictures mounted on small individual pieces of card. Sit the kids in a circle and give each of them a bingo card and some tiddlywinks. You then pull out the stickers from the bag, one at a time. If someone can match that sticker on their card, then they get to cover it up with a tiddlywink. First person to cover all their pictures is the winner.

Equipment : Paper, marker pens
This is a good Easter party game if you have a large crowd of kids. At the beginning of the event, get all the kids to color in some large eggs.

Cut each one in half but in a zig-zag fashion so each one is cut differently. Give each child an egg half and get them to see if they can find their other half. This is one of those Easter party games that is great for getting the kids to know each other.