Kid's Halloween games are fun to play. Kids like to get spooked and playing games is a great way of doing that. 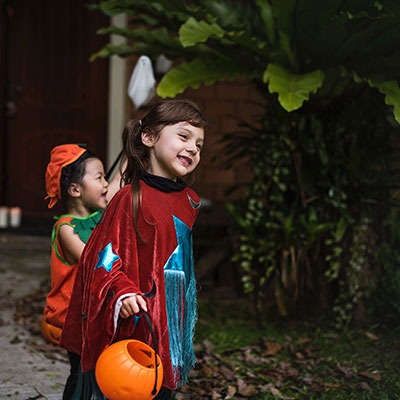 Halloween games are usually enjoyed by all ages as everyone is in a party spirit (excuse the pun). I've come up with a list of Halloween games that we've all enjoyed playing in our family and I think you will too.

So take your pick from the Halloween games for kids below and be prepared for a spookily good time.

First make a witch template on a piece of paper – roughly 4" tall. Cut it out and trace it on to the strong black craft paper. Make as many witches as you will need for the treasure hunt.

Depending on where the game is being held, hide the witches around the room or outside. If you are playing in the dark you could paint the witches with glow in the dark paint.

Divide the kids into teams or pairs and issue them with torches. Turn off the lights or wait till it's dark if they are playing outside and send them off on a 'witch hunt'.

The team/pair to find the most witches is the winner. As an extra bonus you could also hide a paper broomstick and whoever finds this gets a bonus prize. 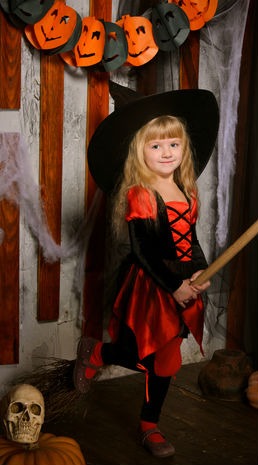 Lay the spiders and creepy crawlies on the ground and then throw the net over the top of them so that all the spiders are covered.

The kids then all stand around the net and on the blow of a whistle they must all quickly get under the net and see how many spiders they can collect.

Depending on how big your net is, you might need to play several rounds in order to allow all the kids to have a go.

This game is rather like 'Beetle Drive' if you have ever played it. The object of the game is to be the first person to finish drawing a Jack-O-Lantern on their pumpkin. They do this by throwing the dice and drawing the face part that goes with the number rolled.

To start, the kids all sit in a circle with the pumpkins in the center of the playing area and players roll the dice to see who goes first – the highest number starts.

The players then take it in turns to roll the dice. They must get a 6 to start and that allows them to choose a pumpkin from the middle of the playing area. After that, each subsequent throw allows them to draw the face as follows:

Give each player a sheet of paper and pen and write at the top in big letters a word or words associated with Halloween. For example you could write: SILLY SKELETON, HALLOWEEN PARTY, WITCH HUNT...

On the word 'go', the players have to write down as many words as possible that they can make from the word(s). When the time is up (give 10 minutes or so) each player scores one point for each correctly spelt word and two points if the word is associated with Halloween. The player with the most points wins.

Pinatas are such fun for all age groups and always come into my list of Halloween games for kids. If you have the time and inclination try making your own pinata.

And if you'd rather buy a pinata then my favorites for this year are: